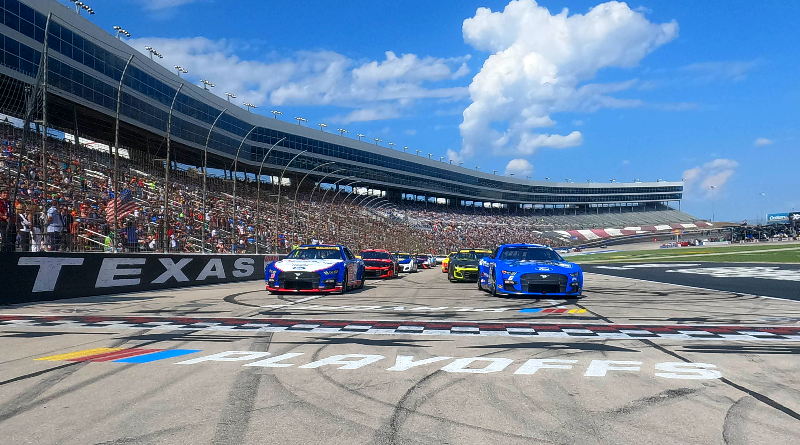 The opening round of the post-season was tough on almost all of the playoff drivers due to mechanical failures, tire malfunctions, and various other mishaps and misfortune. Surprisingly, the streak seemed to continue into the second round, which kicked off at Texas Motor Speedway, a 1.5-mile oval track in Fort Worth, Texas. The flat tire issue, which has been persistant all season, affected nearly half the field and led to another non-playoff driver stealing the win.

LAP 1: The #6 of Brad Keselowski secured pole position in qualifying, continuing the streak of good luck for RFK Racing after teammate, Chris Buescher, won the Bristol Night Race last week. Starting beside Keselowski on the front row was his former teammate, Joey Logano. When the green flag waved, Keselowski was able to pull away to a 2.2-second advantage.

LAP 33: Keselowski’s Ford Mustang began to fade as the steering got loose and the tires started to wear. Logano was able to pass the #6 and take the lead, while Keselowski fell to third place, being passed by William Byron as well.

CAUTION – LAP 40: Martin Truex Jr in the #19 Toyota Camry had been fighting a loose-handling car for most of the race. While racing in the 9th position, Truex spun in Turn 4 and sustained damage to the rear of the car. The field pitted under caution, with William Byron winning the race off pit road.

CAUTION – LAP 49: The #18 of Kyle Busch spun sideways in Turn 4 and made heavy contact with the wall, damaging the car badly and forcing Busch to retire from the race early.

CAUTION – LAP 56: Ricky Stenhouse Jr brought out the third caution of the race after he made contact with the #42 of Ty Dillon and spun on the front stretch.

CAUTION – LAP  78: The #20 of Christopher Bell got into the wall in Turn 1 after suffering a flat right-rear tire. In a separate incident, the #41 of Cole Custer also lost a tire and got into the wall.

CAUTION – LAP 97: Playoff driver, Alex Bowman in the #48 Chevrolet, made heavy contact with the wall in Turn 4 after the right-rear tire blew out and caused the car to snap sideways. Bowman went 8 laps down while his team repaired the damage from the accident. The race restarted with just 5 laps to go in the stage with Kyle Larson and Denny Hamlin on the front row.

STAGE 1 END – LAP 105: After a brief battle with Hamlin that ended in door-to-door contact, Kyle Larson was able to win the stage and collect a playoff point. Behind him and Hamlin, Joey Logano, Daniel Suarez, and William Byron rounded out the Top 5.

CAUTION – LAP 137: Christopher Bell brought out the yellow flag when the right-rear tire went down and caused him to spin for a second time. Bell retired from the race due to damage on his #20 Toyota Camry. Chase Elliott took the top spot and pulled away to a comfortable lead after the restart.

CAUTION – LAP 168: In one of the scariest wrecks in recent memory, the #51 of Cody Ware experienced an apparent mechanical failure. The incident resulted in him colliding head-on with the Turn 4 wall, spinning and careening down pit road before hitting the pit wall. Ware climbed out of the car under his own power and was taken to the infield care center where he was held and checked for over an hour. He was released without any major issue, aside from some ankle pain.

CAUTION – LAP 184: The caution came out for yet another right-rear tire failure; this time, it was Chase Elliott while he was leading. The back end of Elliott’s #9 Chevrolet stepped-out, causing him to scrape the wall coming out of Turn 4. The car came to a rest in the infield grass where the right-side was engulfed in flames and smoke. Elliott climbed from the car physically unscathed, though his playoff points lead took a major hit, leaving him just 4 points above the cutline entering Talladega.

Ryan Blaney in the #12 inherited the top spot from Elliott and held onto the position following the restart.

CAUTION – LAP 197: While racing in the 10th position, the #17 of Chris Buescher spun off of Turn 4 after hitting one of the many bumps in the racing surface.

STAGE 2 END – LAP 210: Ryan Blaney held on to win the stage, picking up the playoff point and marking his 5th stage victory at Texas. Behind Blaney, Ross Chastain, William Byron, Brad keselowski, and Daniel Suarez completed the Top 5. The pitting strategy was varied among the field, leaving the lead to Michael McDowell in the #34 who stayed out on older tires.

RED FLAG – LAP 220: Just before the pace car pulled off the track to start the final stage, the red flag was displayed for a small rain shower and a lightning strike in the area. The race was held for an hour while they waited out the weather delay. When the race finally restarted, Tyler Reddick passed McDowell for the lead.

CAUTION – LAP 242: The caution came out again for the #17 of Chris Buescher when he lost the right-rear tire and spun in Turn 4 while racing in third. Reddick surrendered the lead to make a pit stop along with a handful of other cars, leaving P1 to the #4 of Kevin Harvick.

CAUTION – LAP 253: Just a few laps after the restart, Harvick fell victim to the flat tire phenomenon, sliding up the track and into the wall in Turn 3. When Harvick pitted for new tires, Martin Truex Jr in the #19 picked up the lead.

CAUTION – LAP 267: Similar to Harvick, Truex lost the right-rear and spun out while leading, triggering the 15th caution of the race. Just prior to the yellow, the #24 of William Byron and the #11 of Denny Hamlin had been battling for 3rd place, door-slamming each other in an effort to gain the spot. The contact continued under yellow when Hamlin hit the back of Byron all the way down the backstretch.

CAUTION – LAP 299: The #47 of Ricky Stenhouse Jr lost a tire and brought out the caution after spinning on the backstretch. The #2 of Austin Cindric then spun while trying to avoid Stenhouse jr. After pitstops shuffled the field, Tyler Reddick found himself back in the lead.

CHECKERED FLAG – LAP 334: Tyler Reddick managed to hold off Joey Logano for the final 30 laps to claim the victory, marking his 3rd of the season. Unfortunately, the win came a round too late as Reddick was eliminated from the playoffs in Bristol last week.