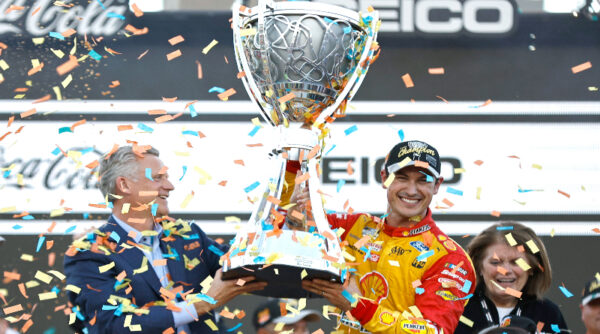 Joey Logano said after winning the Busch Clash in Los Angeles at the start of the season that it was going to be “the #22 in 2022” – meaning his #22 Ford Mustang would take home the championship at the end of the year. It was a bold prediction at the time but it certainly wasn’t wrong.

With victories at Darlington, Gateway, and Las Vegas, along with consistent results throughout the season, it’s hard to say Logano’s second championship was not earned. This is especially true considering his domination throughout the championship race at Phoenix where he led a race-high of 187 laps, won the first stage, and went on to win the race as well.

However, it wasn’t smooth sailing for the other three title-eligible drivers of Ross Chastain, Christopher Bell, and Chase Elliott.

Ross Chastain qualified worst of the Final 4 drivers in 24th place and had to work his way through the field from the drop of the green flag. Chastain went on to finish 3rd in the race and 2nd in the standings.

Joe Gibbs Racing driver, Christopher Bell, was told just prior to the start of the race that Coy Gibbs (chief operating officer at JGR) had suddenly passed away in his sleep at age 49. This tragic news left Bell and his #20 team to compete with heavy hearts. Bell went on to finish 10th in the race and 3rd in the standings.

Chase Elliott battled the handling of his #9 Chevrolet Camaro throughout most of Stages 1 and 2. When he and his team finally got the issues worked out, Elliott began leading among the Final 4 drivers and looked to be a serious threat on the restart to begin Stage 3. Unfortunately, he and Chastain made contact when the field fanned out in the dogleg which resulted in Elliott hitting the inside wall. The #9 sustained damage from the incident, putting Elliott two laps down due to repairs and eliminating him from contention. Elliott went on to finish 28th in the race and 4th in the standings.

While the race was mild and drivers found it had to pass, it was still a day filled with plenty of highs and lows – a fitting end to a dramatic season.