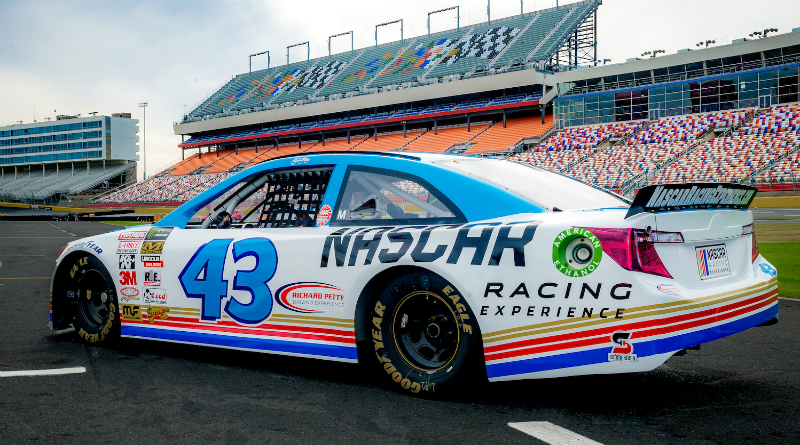 If you’re like most race fans who hear the roar of a NASCAR engine and instantly feel a rush of adrenaline, the Richard Petty Experience IS the thing for you!!

Whether you want to drive one of these bad boy stock cars around the track, or perhaps just ride along and feel the G-force pin you to the seat; the Richard Petty Experience is the ultimate ride if you’ve got a need for speed.

We originally experienced the Ride-Along package at Daytona International Speedway, the icon of NASCAR racetracks, where we met driver Greg Aumick.  In a short interview before we got suited up, he explained that the Petty Experience began at Charlotte Motor Speedway in North Carolina, as the brainchild of Australian racer Barry Graham and Richard ‘The King’ Petty himself. Together they created a drivers’ search program and had the best of the bunch compete in a race in Australia.  From there they hand-picked the drivers that would take excited passengers around the track at speeds of 170 miles per hour, in slightly modified versions of the cars so that a passenger seat could be added.

Eventually, the experience expanded to allow men and women to get behind the wheel and actually drive the cars, and soon more speedways were included to host the NASCAR experience at various times throughout the year.

In addition to increasing the locations and types of experiences, including the number of laps available, Petty Holdings also expanded to include Muscle Cars and Indy Experiences.  However, when pressed as to whether NASCAR or Indy is preferred by participants, Aumick confirmed, “The NASCAR experience is definitely still the favorite”.

When asked what the most popular reaction is to a ride along or a driving experience, Aumick stated, “The thing we hear most is that people have a new respect for the drivers and racing”. Indeed, it’s true that novices and non-fans have a preconceived notion that stock car racing is nothing more than cars turning left and going around in a circle.  But if you dare to put yourself inside one of those 700-horsepower cars you’ll quickly discover that it’s SO much more than that.

To take a look at our experience at Daytona International Speedway, CLICK THIS LINK HERE.

After you’ve ridden so close to the wall that it’s impossible to read the track name, and have battled the kind of 170-mile an hour G-forces that rivet you to the seat, you will undoubtedly emerge with a better understanding of the sport, a fresh admiration for the drivers, and the kind of excitement pumping through your veins that will make you want to instantly do it all over again…

Which is precisely the reason why we did, in fact, do it again, this time at Las Vegas Motor Speedway.  Though speeds at the Vegas track are slightly slower as the track itself is shorter than Daytona by a full mile, the thrill is undoubtedly the same as you will see in the video included below.

It’s the ultimate birthday present or Christmas or Valentines’ gift for any race fan, and one they’ll remember for a lifetime.  We know this for a fact because, to this day, this counts among the most memorable and thrilling experiences our reviewers have ever encountered.

With that in mind, we can only hope that Canadian Motor Speedway, in Fort Erie, Ontario, will eventually make this experience available to fans.  This track is currently under construction with input from well-known NASCAR driver Jeff Gordon,

Speaking of well-known drivers, the Richard Petty Experience has created mock-ups of several recognizable cars so that participants can choose their car based on their favorite driver.  Although not all driver mock-ups are available, there are quite a few, such as Joey Logano’s #22 Shell Pennzoil Ford and Matt Kenseth’s Dollar General Toyota as seen below.

Until such times as Canadian Motor Speedway is available, Michigan International Speedway, with its two-mile, D-shaped track and 18-degree banking is only a five-hour drive from Toronto.  With its broad corners and long straightaways, Michigan is one of the fastest tracks in NASCAR and is sure to please with the Ride-Along or Driving experience which is offered there on select dates.  Check the Drive Petty website for dates and ticket purchases.

But let’s face it… once you’re behind the wheel or riding along as a passenger in the midst of such an awesome sound and speed, it doesn’t really matter which track you visit in order to participate because it will be, hands down, the BEST day you’ve ever had! Check out our Las Vegas Speedway experience video below and see why.