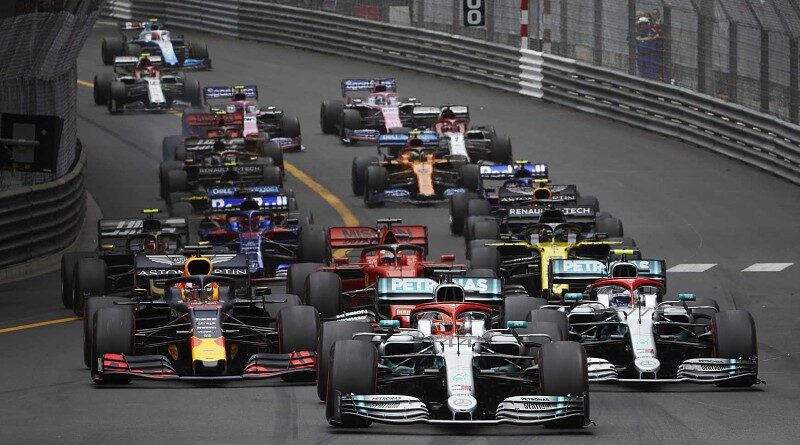 Formula One racing, which also goes by common names such as Formula 1 or F1, is the highest genre of international single-seater auto racing sanctioned by the Fédération Internationale de l’Automobile (FIA) and owned by the Formula One Group.  It has been one of the top-tier forms of racing since its inception in 1950 and it has also become the most high-tech. The technical aspect leads to many terms not used in other forms of auto racing.  Additionally, the word “formula” references to a particular set of rules to which all cars and participants must adhere.  Together, it creates a sport-specific lingo that must be learned in order to fully enjoy and understand what is happening.  We hope we can help you with that, using this glossary of terms.

AERODYNAMICS: The science of aerodynamics.  How air flows around the movement of an F1 car, causing differences in speed.

AIRBOX:  Above the driver’s head is the engine’s intake, called an airbox, which doubles as the car’s roll hoop.

APEX: The geometric center of a turn.  Striving to hit the apex enables the driver to take the turn in the straightest line possible, therefore maintaining the highest speed possible.

APPEAL / PROTEST:  If a team feels they have been unjustly penalized by race officials for an action their driver took on the track, they can appeal the decision with their explanation of what happened and why in an effort to get the penalty overturned.

AUTOCLAVE: A device that uses heat and pressure to cure carbon fibre, which is the primary material used in the building of Formula One cars.

BACKMARKER: This refers to a driver at the rear end of the field, often lapped by lead cars, and quite often are the product of underfunded teams.  Blue flags are used on backmarker cars to warn them to move out of the way of faster cars.

BALLAST: The metal weight inserted into the car to maximize the balance of the car, and to bring it up to minimum weight code.

BARGEBOARD: A piece of vertically mounted bodywork located between the front wheels and the starting edge of the sidepods that assists in smoothing the airflow around the sides of the car.

BLISTER: A bubble that forms on a tire due to extreme heat.

BOTTOMING: When the bottom of the car (chassis) hits the track surface.

BRAKE BALANCE:  A switch located in the cockpit that allows the driver to alter the car’s braking power between the front and rear wheels.

CAMBER: The angle that wheels are tilted inward or outward. A wheel tilted inward toward the top is referred to as negative camber.

CFD: Acronym for Computational Fluid Dynamics, which is a tool used by car designers to predict the aerodynamic flow.

CHICANE: A tight sequence of corners in alternate directions used to slow the speed of the cars.

CLEAN AIR: Air without turbulence produced from other race cars. Clean air can be found at the very front of the field.

COCKPIT: The area in which the driver sits.

COMPOUND: Refers to the formula of ingredients used to make racing tires, ideally to make them durable with the ability to grip the track’s surface.

DEBRIEF:  A meeting of drivers and engineers to discuss strategy, usually after an on-track session.

DEGRADATION: Refers to tires as they wear and lose grip during the race.

DIFFUSER: A section of the floor or undertray at the rear of the car, used to help control the speed of exiting air.

DOWNFORCE: The downward force created by airflow around the car necessary for high speeds in turns.

DRAG: This refers to wind resistance or anything that negatively affects the aerodynamics of the car, resulting in lesser speed and handling.

DRIVE-THROUGH PENALTY:  One of two penalties that can be handed out by Stewards during the race. Drivers must enter pit lane at the assigned speed limit and then reenter the track without stopping.

DRS: Acronym for Drag Reduction System located on the rear wing, allowing the driver to adjust the wing on straightaways to reduce downforce and increase speed.  However, the use of the DRS comes with rules — it is not to be used within the first 3 laps of a start or restart. It can only be used if the driver is within a one-second gap of the car in front.

FLAT SPOT:  When a car slides and the driver locks up the brakes, the area of the tire scraping the pavement is exposed to excessive wear that creates flat spots.  This leads to vibrations and other problems and requires a pit stop for fresh tires.

FORMATION LAP: Basically a pace lap used to line up cars and prepare them for the start.

G-FORCE:  A physical force equivalent to one unit of gravity that is multiplied during rapid changes of direction or velocity. Drivers experience severe G-forces as they corner, accelerate and brake.

GRAVEL TRAP: A bed of gravel on the outside of corners designed with the aim of bringing cars that fall off the circuit to a halt.

GRIP / TRACTION:  The amount of traction a car has at any given point, affecting how easy it is for the driver to keep control through corners.

HANS DEVICE: HANS is an acronym for ‘Head and Neck Support’. It is a mandatory safety device that straps to the back of the driver’s helmet and acts as a head and neck restraint.

LOCK-UP:  Refers to a driver over-braking quickly thus locking up one or more tires.

MARBLES: Small bits of rubber, dirt, and traction compound that form during the race and collect near the outside wall of the track. If a car gets into the marbles, it impedes traction.

MARSHAL:  A course official who supervises the safe running of the race, including spectators and participants.

OUT BRAKE / LATE BRAKING:  A term used when passing.  Refers to a driver braking later than the car he is overtaking.

OVERSTEER / UNDERSTEER:  Oversteer refers to the rear wheels having difficulty sticking to the track in the turns. Understeer is obviously the complete opposite. The car is not turning well and traction in the front is poor.

PADDLES:  A clutchless gearshift system located on the steering wheel, with the downshift paddle on the left and the upshift paddle on the right.  This system replaces a gear shift, thus allowing the driver to keep both hands on the wheel.

PADDOCK: An enclosed area behind the pits, off-limits to the public because it where the teams keep their transporters and motor homes.

PARC FERME:  A fenced-off area into which cars are driven after qualifying and the race, where no team members are allowed to touch them except under the strict supervision of race stewards.

PIT WALL: The area in which team owners, managers and engineers spend the race, most often under an awning to shield their computer monitors from rain and sun.

PITS:  An area of track separated from the start/finish straight by a wall, where the cars are brought for new tyres and fuel during the race, or for set-up changes in practice, each stopping at their respective pit garages.

POLE POSITION:  The driver who records the fastest lap time in qualifying is awarded the pole position, which is the first place on the starting grid.

POWERTRAIN: Refers to the entire system providing an F1 car’s power. The powertrain (or power unit) is comprised of the engine, two Energy Recovery Systems (ERS) and an Energy Store.

QUALIFYING:  A knock-out session held on the day prior to the race, where drivers compete to set the best lap time they can in order to determine the starting grid for the race.

RETIREMENT:  When a car has to drop out of the race because of an accident or mechanical failure.

RIDE HEIGHT: The distance measured from the bottom of the car to the ground when the car is running at speed.

RUMBLESTRIP:  A bumpy strip found on the exit of a corner as a warning to drivers they are at the edge of the track.

SAFETY CAR:  Known in most auto racing as a pace car, used to set the speed of the field prior to the start of the race and during cautions.

SECTORS:  Used for timing and to determine where drivers are on the track.  The lap is divided into 3 approximately equal sections, known as Sector 1, 2 and 3.

SLIPSTREAMING:  Another way of saying ‘drafting’. It is the aerodynamic science that enables 2 or more cars running nose-to-tail to be faster than one single car. The lead car cuts through the air so the car/cars ‘directly’ behind experience less resistance.

STEWARD:  A race official that make decisions and determine penalties.

STOP AND GO PENALTY: Refers to a car being called to pit lane and held there by officials for a period of 10 seconds before being allowed to resume the race.  This is a penalty for a rules infraction by the driver.

TELEMETRY: A radio device that relays information such as engine, tire, steering and throttle performance from the car on the track to the engineers on pit lane. The team can monitor both car and driver activity to ensure the car is performing properly. It helps the team to notice any mechanical issues that may arise with the car during the race.

TIRES and OPTIONS: Three different tire compounds are featured in every race, except during rain at which point there are five different tires. Soft, medium, and hard all offer different characteristics and durability and can be changed up during the race.  Each car must use a minimum of 2 different types during a race.

TIRE WARMER: Refers to an electric blanket that is wrapped around the tires so that they will start the race closer to their optimum operating temperature.

WHEELBASE: The distance between the centre points of the front and rear wheels. An F1 car’s wheelbase influences the way it handles.